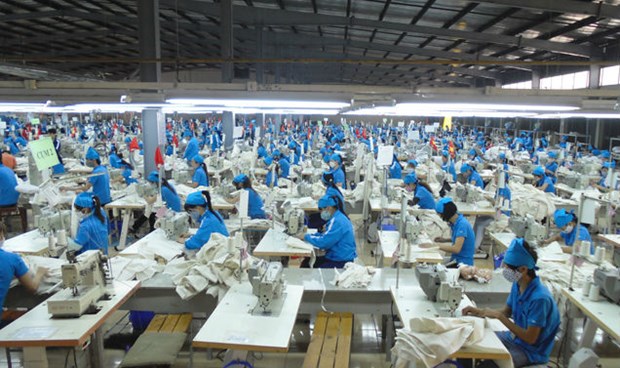 Samsung is set to ramp up investment in Vietnam to cash in on the cheap labor that the South Korean electronics giant no longer finds in China. Japanese companies in Thailand are also setting their sights on Vietnam because of its low-wage workforce. South Korea was the largest foreign investor in Vietnam over the first two months of the year, followed by Singapore and Japan, with most foreign direct investment (FDI) over the period landing in the manufacturing and processing sector – which employs a cheap labor force – according to a General Statistics Office monthly report released Wednesday (February 26). As can be seen from the above information, Vietnam has been increasingly attracted foreign investment thanks to labor cheap advantage. However, it also brings drawback when foreign companies coming Vietnam always set mind to lower salaries of labor force in Vietnam, which create an enormous border for seeking jobs in Vietnam with low income nowadays.

Vietnam’s abundance of cheap labor has played an increasingly pivotal role in wooing foreign firms looking to set up overseas manufacturing operations in a country with a population of 90 million. This edge appears to be working well in the context of rising labor costs in China and political mayhem in Thailand.

But analysts say the bottom line is that competing in terms of low wages is a risky business and should only be considered an edge in the short-term for a developing country like Vietnam. The biggest challenge for the country is to ensure that the quality of its labor force improves steadily, they say. Obviously, normal jobs in Vietnam are difficult to find, especially low-end labor force. They don’t get enough well-trained knowledge to have jobs as expected.

“In the short-run, FDI may help create new jobs in Vietnam and attract redundant workers from rural areas. In the longer-run, however, low wages in industry may contribute to increased relative poverty,” Pietro Masina, an associate professor of economics at the University of Naples “L’Orientale” in Italy, told Vietweek.

“Industrial workers in Vietnam are often exposed to high levels of vulnerability and they may easily fall into poverty again,” he said.

Whereas unskilled workers in China make around US$300 per month, Vietnamese workers receive half to a third of that amount. A survey conducted by the Japan External Trade Organization in 2012 found that average wages in Thailand were around $6,704 for workers and $27,204 for managers compared to $2,602 and $12,245 in Vietnam.

But at the end of the day, Vietnam’s low-cost advantage will not last long, analysts say. While the median age of 27.4 years is below China’s 35.2 years, Vietnam’s population is aging, according to a report released in 2012 by McKinsey, a management consultant. The report also cited government projections as saying that Vietnam’s labor force is likely to grow by about 0.6 percent a year over the next decade, a decline of more than three-quarters from the annual growth of 2.8 percent from 2000 to 2010.

Analysts point out that FDI in Vietnam – like the rest of Southeast Asia, with the exception of Singapore and to a limited extent Malaysia – gives a very limited contribution to technology diffusion. Typically foreign-invested firms import all the machinery and all the value-adding intermediate goods and simply employ a cheap labor force to assemble. This pattern contributes to the large trade deficit with other Asian countries. This deficit is only partially compensated by the surplus with the US and the European Union. Vietnam gains very little from this.

The fear is that the country could fall into a “middle income trap” like Indonesia, Thailand and Malaysia, analysts say. Vietnam joined the World Bank’s lower-middle income bracket in 2009, with gross national income per capita rising to $1,755 in 2012, from $110 two decades earlier.

“If Vietnam continues to try to lure cheap labor investment, it will fall into the middle income trap,” Thomas Jandl, an East Asia expert at the Washington-based American University who has published on Vietnam’s development models, told Viet week. A big question created for economic strategic planners in Vietnam is how to take advantage of challenges and opportunities of inexpensive labor cost

As part of the across-the-board education shakeup announced last October, starting this June Vietnam will require fewer subjects, cutting the list from six to four, on the high school exam. The education ministry is also looking to give at least 30 universities across the country greater flexibility in recruitment, meaning they could apply their own criteria when judging students before deciding whether they would admit them.

These moves are indicative that Vietnam is looking to put less weight on a rigid examination system, experts say. Plans are also underway to amend textbooks that have raised academic hackles for promoting memorization and rote learning. And the answer is Vietnam needs to have systematic change in education in all generations.